Best Gig Jobs In the US

The rise of gig work has only increased since the coronavirus pandemic hit, with many choosing to take up independent contracted jobs as a way to generate an income. With the attraction of setting your own hours each week without the worry of having to book time off, it’s clear to see where the desire lies.

In this study, job discovery platform DirectlyApply has revealed the top states to work in as a gig worker, taking into consideration nine cost and job opportunity factors including the cost of living, the number of restaurants & attractions, the number of advertised gig roles and more.

The study also takes into account the best gig companies to work for, which looks at a breakdown of the best US gig companies, revealing key information gig workers will need to consider such as if you need your own equipment and what perks you might receive.

The Top 30 States To Work In For Gig Employees 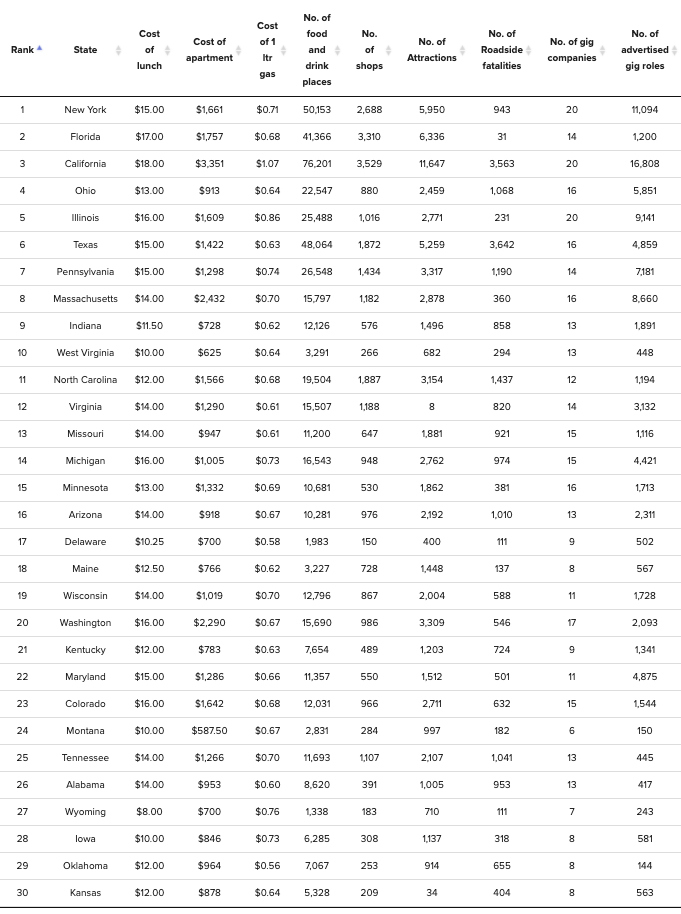 New York Revealed As The Best State For Gig Workers!

With a high number of attractions, shops and currently gig jobs available, New York ranks as the best state to become a gig worker. Filled with not only the world famous vibe, the state provides the highest levels of opportunity for gig work. However, to accompany this, the cost of living is high. The cost of an everyday lunch which stands at $15 and litre of gas at $.071 are amongst the highest of the study, giving workers something to think about.

California boasts the highest number of gig work opportunities out of the top 30 states, with more than 16,000 being advertised. This paired with 20 gig companies means there’s a high level of variety for the gig work you could be doing. This could include being a delivery driver, a dog walker or a cab driver!

The Top 30 Gig Companies To Work For 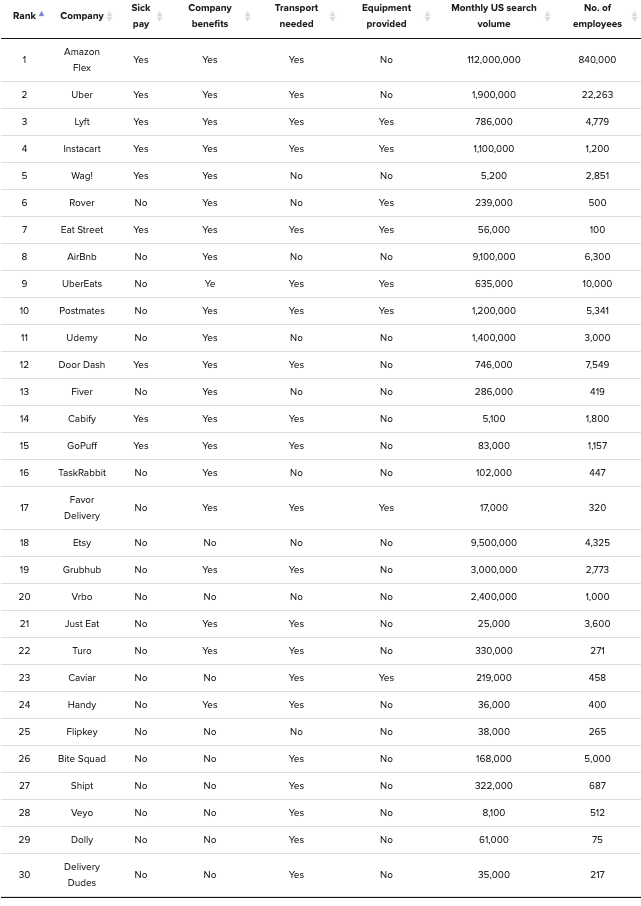 Amazon Flex Is Ranked As The Best Gig Company To Work For!

Whilst being one of the biggest companies in the world, Amazon also ranked 1st as the best gig company to work for. With the added benefit of company perks and sick pay, its popularity in the number of search results mean there is a high number of delivery and warehouse arrangement opportunities available, in turn meaning more work for you to pick up. Again, being able to pick your own hours is what draws many people in to working for a gig company and Amazon is no exception. Cab driver giants Uber and Lyft fall just behind Amazon in second and third spot.

Noticeable companies within the top ten are Wag! And Rover. Way! And Rover are dog walking gig companies which allow individuals to dog sit or dog walk for families who cannot be present themselves. Much different to the usual industries on this list, it’ll certainly appeal to a lot of people. After all, who wouldn’t want to be paid to look after a puppy?

An important part of working on an independent contract is the aspect of transport and admin information. For a lot of gig companies you need your own transport. Whether that’s a car or bike, you need to take this into consideration when choosing which company to apply for.

The below table shows key information that you need to know before applying for jobs at these gig companies. 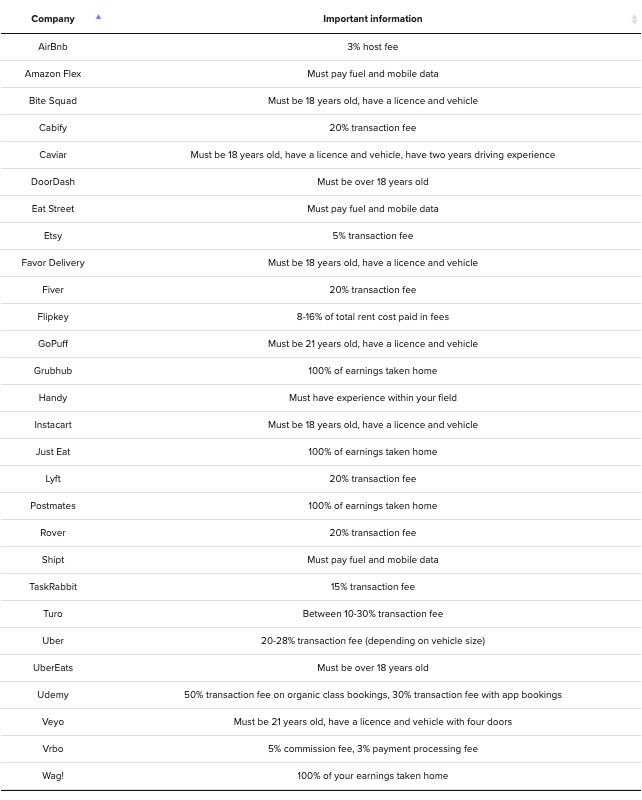 The Gig Economy - What Does The Future Look Like? 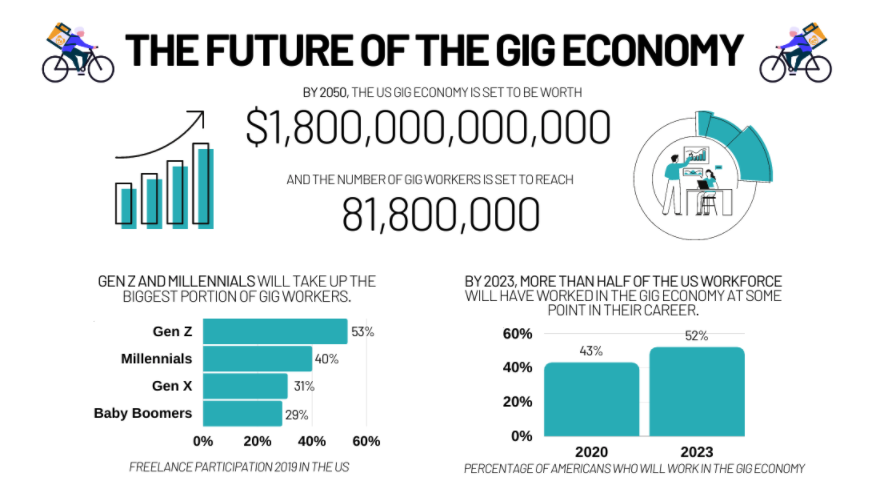 The gig economy is a booming industry and will no doubt continue to see an upward trend in its growth. With more and more individuals looking to secure independent contracts as part of a side hustle and more and more companies seeing the benefit of gig work, the economy is only increasing.

In conjunction with the study, DirectlyApply looked into the trends for the future of the gig economy, analysing the expected revenues, number of gig workers as well as looking into a breakdown of the age and gender of employees in the US.

With the data showing the top 30 states in the US to work in and the top 30 gig companies to work for, which would you consider applying for?

In order to calculate the best states and companies to work for, we analysed a range of factors to create an index whereby we could create a scoring system to rank the best to worst states and companies to work for. For best states we ranked nine quality and opportunity for job ranking factors including DirectlyApply's own internal data displaying the number of companies and gig jobs available in each state. For the best companies we ranked six benefit and popularity factors. The company benefits are deemed by benefits such as health care, discounts or insurance available